KHIPU are proud to report that the Major Chiefs U21 Football team are celebrating their championship win at the Mwalimu Foundation u.21 Tournament Cup which was held at Zwide Celtics Grounds on Saturday 7th January 2023.

Eight teams took part in the tournament, player standards were extremely high and the Major Chiefs played hard and fast to finally be crowned as champions. 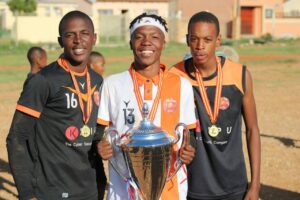 The Major Chiefs Sports Club is based in Zwide, Eastern Cape Province, South Africa and provides a range of sporting opportunities, coaching and support for young people from a historically disadvantaged background.

KHIPU Networks have sponsored the Major Chiefs Football Team for a number of years, as part of our corporate initiative to give back to the communities and areas that operate our business within. KHIPU Networks sponsors a wide range of charities, activities and initiatives in the United Kingdom and South Africa.

Further Information about our Corporate Initiatives can be obtained from